Keep your wings and other important parts of your Embraer EMB 110P1 Bandeirante safe with our FAA-Approved boots.

The Embraer EMB 110P1 Bandeirante is a Brazilian general-purpose aircraft with twin-turboprop engines designed for military and civilian use. This model is a variant of the Embraer EMB 110 Bandeirante, first developed by French Engineer Max Holste in 1965. The 110P1 was introduced in 1973 and was a quick-change civilian transport vehicle with a rear cargo door. Other variants were released that removed the cargo door. These were produced until 1990, when an upgraded version, the Embraer EMB 120 Brasilia, was released. Embraer built 494 EMB 110 aircraft in different variations. Its primary use case is for private, civilian, and military transport.

Our boots include fast delivery, a 3-year, no-hassle warranty, and guaranteed compatibility for existing configurations. 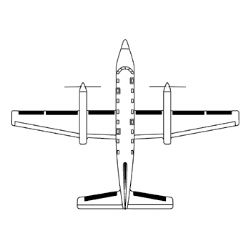