Cessna Chancellor 414A (With Lights)

Keep your wings and other important parts of your Cessna 414A Chancellor safe with our FAA-Approved boots.

The Piper Cessna 414A Chancellor is an American transport aircraft with two 310hp TSIO-520-N engines. This plane is a variant of the Cessna 414, first produced in 1968. The 414A was introduced ten years later and included a narrower vertical tail, a longer nose for more baggage space, redesigned landing gear, new models of motors, and a longer span bonded wet wings without tip tanks. These were produced until 1985, with 554 known to have been built. Its main use case is private transportation, hobbyists, and aircraft training.

The Piper Cessna 414A Chancellor seats one to two crew and can hold up to eight passengers. The Chancellor is large by hobbyist standards, with a wingspan of over 44 feet and over 36 feet long. The plane has a max speed of 270 mph and a range of 1,528 miles.

Our boots include fast delivery, a 3-year, no-hassle warranty, and guaranteed compatibility for existing configurations. 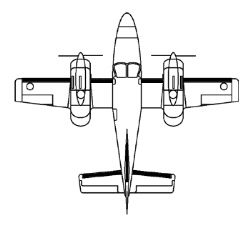