Ice Shield gets frequent questions about all de-icing and aircraft. Below are some common questions and answers about aircraft de-icing!

The deicing process differs depending on the type of aircraft. Ice Shield utilizes pneumatic de-icing for wing boots and anti-icing electro-thermal for propeller boots. For all additional questions on other types of de-icing and to find in-depth process steps, refer to the FAA's Standardized International Aircraft Ground Deice Program (SIAGDP) document.

Q: What is deicing?

The process of removing ice, snow or frost from the surface of an aircraft.

Q: Is there a way to deice aircraft while in flight?

Yes. On aircraft equipped with pneumatic wing boots, the boots inflate and deflate to remove ice from the surface of the aircraft. The de-ice boot inflates, which is signaled by the pilot, and break any ice on the leading edge surface. Once the ice is broken, the wing boots deflate allowing the ice to fly off wing.

The FIKI certification is designated by the airframe manufacturer, not by the manufacturer of the de-ice product. It is strongly advised to avoid icing conditions whenever possible.

Q: How are deicing products applied?

Pneumatic wing and electro-thermal propeller boots are installed with adhesives. Ice Shield wing boots can be applied with either a glue adhesive or pressure sensitive adhesive that is pre-applied on the boot. Other de-icing products can be sprayed on the aircraft prior to flight.

Ice Shield de-icers are made of rubber polymers.

Q: How long does it take to deice an aircraft wing?

Ice Shield pneumatic wing boots cycle in intervals of ~6 seconds on and ~54 seconds off.

Q: What deicing components of the aircraft does Ice Shield support?

Q: Do wing boots keep ice from accumulating on the places surface after initial removal?

After the initial deicing process is cycled, it may be required to fire the boots multiple times depending on the conditions the aircraft is encountering. 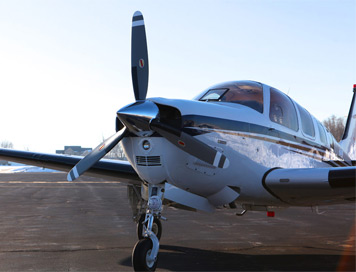